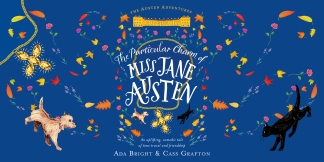 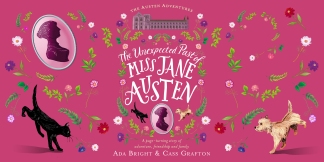 The Unexpected Past of Miss Jane Austen

Cass and I were honored to be invited to launch our new release through Canelo Escape,  The Particular Charm of Miss Jane Austen, at the Pre-Festival Get Together for the Jane Austen Festival in Bath last month, and it was a fantastic night!

The book is, after all, set during this very Festival in the beautiful city of Bath, so what could be more fitting?

The sell-out event took place at St Swithin’s Church (where Jane Austen’s parents were married), and we arrived to find the lovely Festival volunteers had readied everything. All we had to do was set out our books and publicity material and wait nervously for people to arrive (Cass felt a lot better once she had a glass of wine in her hand)!

We’d had posters made up for both The Particular Charm of Miss Jane Austen and the sequel, The Unexpected Past of Miss Jane Austen (releasing 7th November but already up for pre-order!), along with the blurb – which you can read here for the first book in the Austen Adventures series, and here for the second. This enabled us to have some lovely conversations with people attending the event, and we were delighted with the interest in our stories.

We’d made up some goody bags for the first 30 people to buy signed books, which proved very popular, especially the Californian candy and the Swiss chocolate!

We were honored to have Dr. Gabrielle Malcolm (amongst other things, an Austen scholar and author of the upcoming non-fiction book, There’s Something About Darcy – releasing on 11th November) introducing us and moderating a Q&A, which was a lot of fun.

Afterwards, there was time for more conversation as we signed books and handed out the goody bags, during which we met some lovely people from across the globe.

We were also touched and thrilled to see several friends there, who had all travelled some distance to support us.

A huge thank you to everyone involved. We had a great time!

3 thoughts on “Charmed at the Festival! Our book launches at the Jane Austen Festival in Bath”